What does it mean to truly understand the history of the Merrimack River watershed? Is it enough to see how the rivers powered the mills that  Lowell was built around? Or should students study the conflict between the National Park and the hydroelectric company Enol over the future of the historic dam at the Pawtucket Falls? Is it more important to know that hundreds of years before the power canals were dug through Lowell, the Penacook used the falls as a yearly gathering place? Or must students study the history of the waterways themselves, and learn how sediment in lakes and rivers contains its own records?

For students in the high school course, “The Merrimack: The Natural Setting and History,” all of these questions played a part in a semester spent mapping the meaning of the Merrimack to our region. Students came to see that just as you couldn’t study the history of people in this region without understanding the impact of the river, you couldn’t study the waterways without understanding the impact of people.

Science teacher Katharine Hinkle first had the idea for the elective class when she was putting together an endersession last year. In the endersession, called “A Week Along the Merrimack and Concord,” students took to the waterways in canoes and kayaks and followed the path taken by Henry David Thoreau along the local rivers 175 years ago. As students did so, Hinkle found herself not only helping students understand Thoreau’s view of nature, but also teaching them about geology, ecology, and local history.

“The biggest takeaway from this class is that we need to respect our history and respect our landscape.” Marc Printz ’15

For students, many of whom had never given a second thought to the river that shapes our region, paddling the waters was eye‑opening. Hinkle wanted to spend a semester building on that learning, but she knew doing so would not fit cleanly in any one discipline.

So, in the Spring of 2014, with the support of head‑of‑school Greg Orpen, she teamed up with history teacher Caitlin Sullivan and began planning a course that would trace the Merrimack river through space and time. They pided the course into four major units moving back through time, and challenged students to ask questions that crossed traditional disciplinary lines. 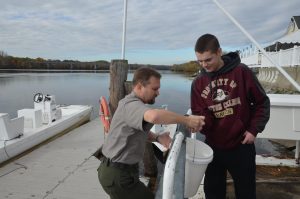 Students worked with the National Park to do water quality testing as part of their study of the current day Merrimack River.

In a unit on land use in the colonial period, for example, students began by learning about the conflict between the Puritans, who saw in the region a wilderness to be tamed, and the Penacook and other peoples, who had lived and gathered along the Merrimack for hundreds of years. Though students had read extensively about the way Europeans had cleared and settled the land, for many, the impact of that settlement didn?t sink in until they saw it in scientific data.

In studying the geological history of the area, students had used glacial varves, sediment layers from glacial runoff, to date local lakes. Later, looking at pollen deposits in sediment records, students saw how the impact of deforestation on local waterways showed up in the geological record, and could be used to date European settlement in the area.dents had read extensively about the way Europeans had cleared and settled the land, for many, the impact of that settlement didn’t sink in until they saw it in scientific data.

For Senior Marc Printz, looking at the historical and geological record helped drive home just how different the land in our area looked a mere 200 years ago. “It’s fascinating to think that the forest we’ve grown up with wasn’t there for so many years,” he said. “It’s important to see how we’ve changed, and how we can plan to keep what we have now, and use our space wisely. The biggest takeaway from this class is that we need to respect our history and respect our landscape.” 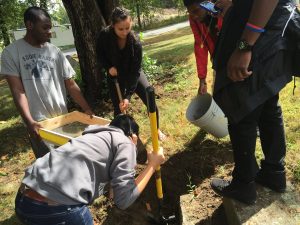 “A lot of times history class can seem like it’s just taking notes,” explained Senior Lexie Reed. “But when we looked at varve layers, we didn’t just learn the history of the lake, we also learned how we knew the history. Learning how we know what we know makes it easier to remember and more interesting.”

Sullivan agreed that the course helped students expand their notion of what history could be. “For a lot of kids who weren’t successful traditionally in history,” she said, “having field work helped them engage with the material.”

“It’s nice to be able to connect knowledge to the place you live.” Arthur Potter ’15

Students were able to use the connections they made between history and science to help them look forward at the future they would like to see for their region. As senior Jake Lowry explained, “The problem was that the Europeans wanted more land, and the solution was just to push the natives out and take and take instead of planning for the future,” he said. “I think that can translate to now. We need to plan where we put people and businesses, we can’t just keep taking land.”

For many students, it was surprising simply to learn how much of a role the Merrimack River plays in shaping areas they’ve known their whole lives. 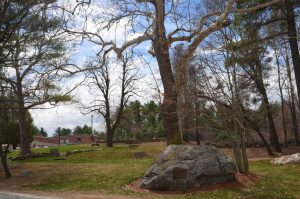 The foundation of the Tyng Mansion is visible just beyond the high school parking lot.

Senior Lexie Reed explained, “I was surprised at how much places in this area are related. I have a house near Lake Winnepesaukee, but I hadn’t realized that the water from that lake flows right down 100 feet from this school, and to where I live, and then out to Newburyport where I go all the time. I realized how much this one river is present in my life.”

“I realized how much this one river is present in my life.” Lexie Reed ’15

For Senior Marc Printz, his new understanding of the region hit him most strongly one day when he was working at his internship in Lowell, where he interns with the department of public works. “One day, the head of my internship brought me out on the dam,” he said, referring to the dam at the Pawtucket Falls. “As I stood there, I could suddenly see that the entire reason that Lowell and everything around it is there is because of those falls, just because there happened to be some rocks that were a little tougher and didn’t erode away. It’s fascinating to think how different history would be if those rocks had not been there.”

Other students were excited to begin to understand what a central role the Valley played in our national history. Senior Jake Lowry explained, “This class has allowed me to look at the bigger picture. We’ve always known we live in the Merrimack Valley, but now I see the significance of this area. This is where industrial history in this country started. We learned why we live here, how this river is used.”

That knowledge wasn’t just built in the classroom, though. Students were out in the field in this class more than they’d ever been before. Lowry explained, “In this class, it’s always hands‑on. When you go out in the field and see why things are the way they are and how they got there, that provides you with much better insights, both from a scientific and a historical perspective.”

For some students, just the fact that they can connect what they’re learning to their environment improves engagement. Students explained that since beginning the course, they find themselves talking to their friends and families about the landscape around them.

“A lot of people complain that they won’t use anything they learn in school, but I find this course extremely useful to me.” said senior Arthur Potter, ’15.  “I like to know things about where I am. It’s nice to be able to connect knowledge to the place you live in.”

As they studied the area, students came to appreciate the cultural richness all around them. “If we look at Lowell and other cities along the Merrimack,” Lowry explained, “we see a big, thriving community. By having the river here, people have traded with each other over time and built up cities.”

“When you look back at the history,” Printz said, “Lowell was and still is a cultural hub and a front door to immigration into the United States.”

Learning about the history of people in the area wasn’t limited to the city, though. It started literally just outside the classroom. Within a hundred yards of the the school building sits the foundation of the Tyng mansion, a site inhabited since 1668. 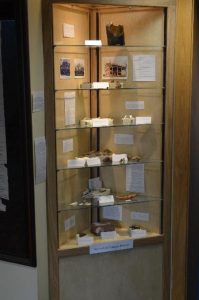 In the 1980’s, archeologists at Boston University conducted a dig at the Tyng Mansion site. Sullivan arranged with the Robert S. Peabody Museum, which now houses the artifacts, to visit the classroom and show students the artifacts found on campus. That experience inspired Sullivan and Hinkle to have students do a dig of their own.ory of people in the area wasn’t limited to the city, though. It started literally just outside the classroom. Within a hundred yards of the the school building sits the foundation of the Tyng mansion, a site inhabited since 1668.

Within a week of the visit from archeologists, students were staking out dig sites on campus and sifting for artifacts. In the layers, students could see how this land was used centuries ago, in everything from cow teeth they dug up to pottery the Tyng family would have used. Hinkle and Sullivan were thrilled to see students were not only able to hold history in their hands, but literally to  unearth it themselves.

Arthur Potter’s group had learned that the key to archeology is understanding where people throw their trash. “We learned you’ll find a lot of things near rock walls and at the bottoms of slopes, because that’s where they’d throw their trash,” he said. “So we found a rock wall at the bottom of a slope and we started digging.” That’s where his group found pieces of a horse‑drawn sled. They excavated sections of the sled, but left more for future classes. “There’s still more down there,” Potter noted.

When it came to the work on the school site, the class was supported by the IACS facilities team. Collin Kennedy, who has worked at the property since before IACS relocated here and is also a local history buff, joined the class to help with the archeological digs, as well as to show them local historical landmarks. 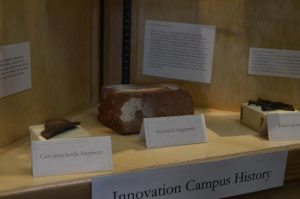 At the end of the semester, Sullivan arranged for the items housed at the Robert S Peabody Museum to be relocated to IACS. Kennedy built a display case in the main lobby of the school where the artifacts are now showcased.∎