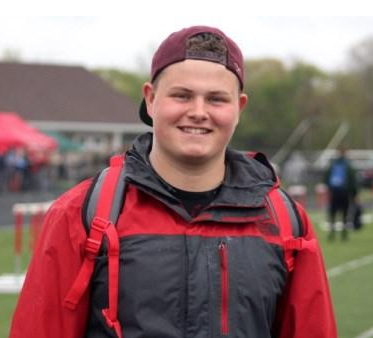 His top mark of 61’7" (thrown at the divisional meet) was a school record as well as the top throw in New England this year, the furthest throw in MA since 2009, and an MA junior class record.

In the Discus, Aiden was also undefeated in the regular season. He won the Sunset Invitational and the Eastern MA Div. 4 championships. He also went on to place 4th at both the All-State meet and New England championships.

Here is an exerpt from an article in the Boston Globe:

His personal-best toss was the farthest by any Massachusetts shot putter since Falmouth’s Samuel Bombaugh threw 63-3¼ in 2010. Felty, who threw nearly 3 feet farther than his previous personal best (58-9¾), said the shot came off stronger Saturday, noting that it traveled higher and straighter than normal. “I’m usually pretty pumped up, I mean I yell a lot. I cheer a lot,” Felty said of his rambunctious performance. “Today I was definitely more excited because after my first throw I knew it was going to be a pretty good day and after my next couple throws I was like, ‘Oh sweet, this is like the best day of my life.’ ”