Dalena Soun, a sophomore, was in charge of the fundraiser. There were efforts to raise money such as collecting plastic water bottles and soda cans in designated blue bins. Blue wrist bands and mental health stickers were sold during lunch to further collect proceeds.

An event was planned called the Mental Health Showcase, and it took place here on campus, in the auditorium, on Friday, May 3rd, during lunch.

The showcase was run by students, for students, and was meant to shine a light on mental health. Performances included singing, playing of instruments, and sharing personal stories of struggles with mental health. We also received original pieces of artwork.

“I was thinking of what gives me peace when everything’s going wrong; I listen to music when I’m sad or stressed. I wanted to spread awareness on how mental health has deeply affected our generation, by expanding it into artwork and other forms of expression through this showcase.”

We received input from audience member Yuliana Lugo on the showcase:

“In my past school, we didn’t have people exactly tell their stories. It was more like a motivational speaker, not an actual student our age going through the same stuff as us. At my old school I didn’t really pay attention, but hearing it from my own peers and community members today helped connect in a different way. I just took away that there are people who do care and understand about mental health. It was good to see how people are willing to put themselves out there and say what they need to say.”

Our school was able to come together as a community, to spread awareness and advocate for what we feel strongly about! 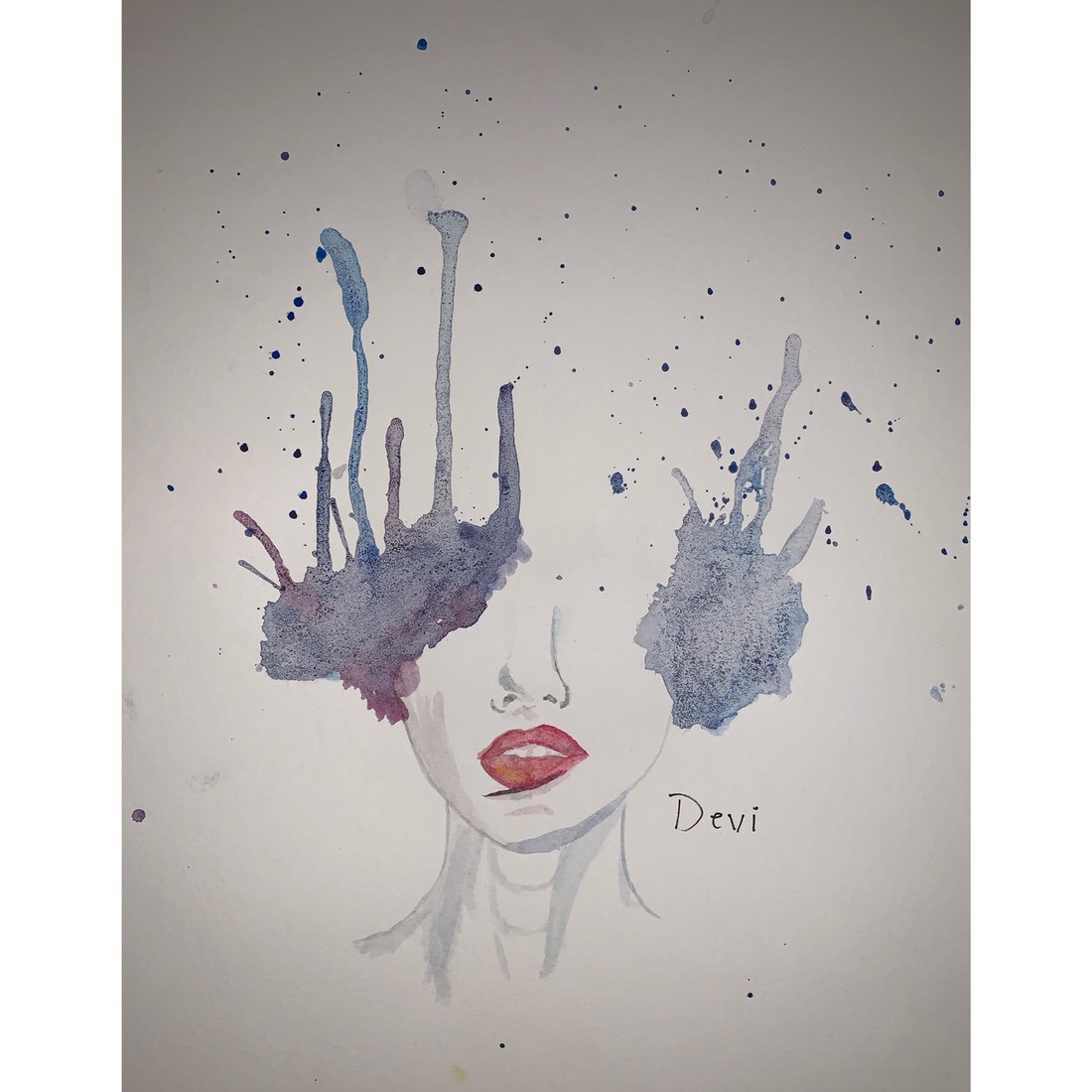 For a list of performers as well as photos, please read the entire article on Student Health 101, our online wellness magazine. Here you will also find two other articles about mental health and the IACS student community.

My My Tran is an 11th grade student at IACS. This past semester she interned with the Director of Health and Wellness spreading awareness, education, and support regarding wellness issues.

Thank-you My My for your focus, hard work, and commitment to the IACS community. 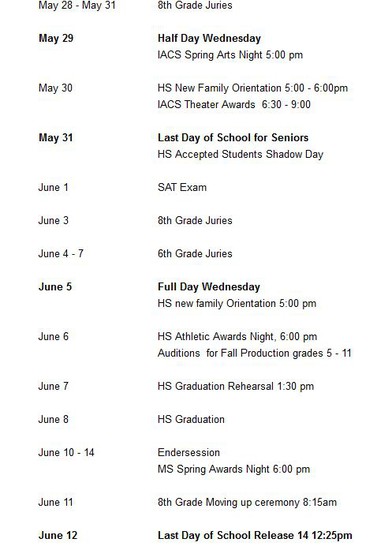 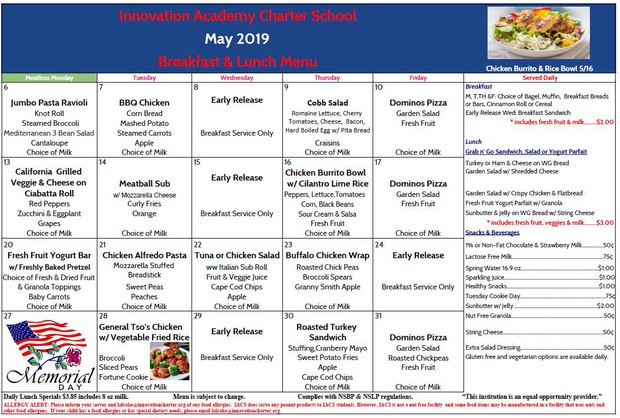 Busing Information: An email regarding the 2019-2020 transportation program was sent out on May 15. As a reminder, this year, both Christianson and Tyngsboro bus applications will be online forms. You will be able to pay for Christianson busing using a credit card, if you choose, and pricing has been decreased. A 50% deposit will be needed to secure a seat on the bus and seats fill on a first come first serve basis. The email contained all the links and details you need to sign up.

Contact Marybeth Bush at mbush@innovationcharter.org if you have any questions.

Jury Presentations are one of the cornerstones of our curriculum. Sixth and eighth graders present portfolio pieces and their progress towards their Individual Learning Plan goal to build an argument as to why they should be promoted to the next grade level. Their audience includes their staff assessor, a younger student buddy, and a community volunteer. Volunteers play an essential role at juries by providing an unfamiliar but supportive audience for our students. This is a great way to learn more about our school’s curriculum and mission as well.

If you have any availability during the school day to join us, please fill out the following form ( 3-5 minutes to complete) and reach out to the main office if you have not heard from Katie Hoyer (khoyer@innovationcharter.org) within two business days. Jury dates and times are listed on the second page of this form. Your information is saved when you complete the first page but not submitted until you complete both pages of the form. You will receive an immediate "receipt" with a copy of the information you submitted to us. If you would like to update the information you submitted to us, please email Katie Hoyer (khoyer@innovationcharter.org).

Please send the link to anyone that you think would enjoy volunteering!

Innovation Academy Charter School seeks a part-time library staff person. (8am-3pm on Tues & Thurs during the school year, with flexible hours during the summer) Preferred candidates will have some library experience (cataloging & circulation), excellent communication and organizational skills as well as the ability to work independently. Please send resume and cover letter to gorpen@innovationcharter.org. For more information please see the "Employment" page of our website. 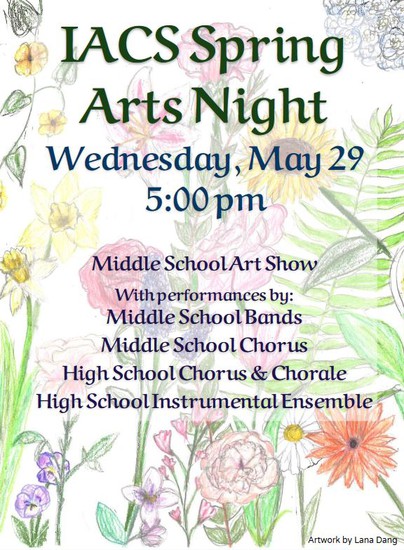 Middle School Art will be on display starting at 5:00 pm. Performances by the musical groups will be starting at 6:00 pm and will take place in the auditorium and library. Join us for a great evening of art and music! 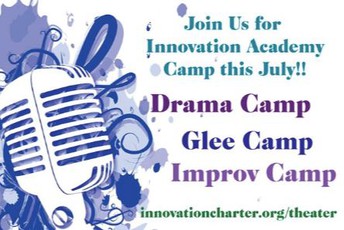 Join us for Performing Arts Camps this summer, for students finishing grades 4 through 12! Camp has a free, public performance on Friday night. Don’t miss your chance to shine on stage! Sign up here.

The first 12 students finishing grades 8 and up who sign up for Glee Camp to have the option of traveling into New York City to see the musical “DEAR EVAN HANSEN”!

The first 12 students finishing grades 8 and up who sign up for Improv Camp to have the option of traveling into New York City to work with Broadway stars!

Any students who sign up for Drama Camp to have the option of traveling into New York City to perform on Thursday, July 25!

Scholarships are available and are based on need. Please email rhawthorne@innovationcharter.org with any questions! 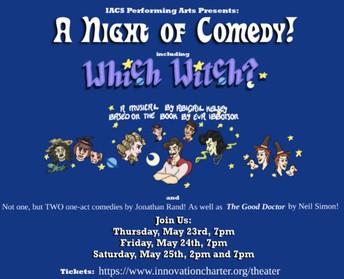 WE WANT YOU TO JOIN US FOR OUR MAY PRODUCTION!

We are especially excited for Thursday and Friday night’s productions where we will see some of our favorite staff members perform in a comedy called "The Good Doctor"! Don’t miss Dr. Arnold, Mrs. Henry, Mr. Willoughby, Mr. Pisco and Profe Ashley! 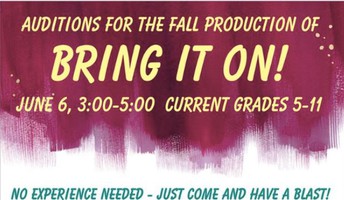 Enjoy Cheerleading? Or are you interested in taking part in a musical by Lin Manuel Miranda that tells the story of going through High School? Please join us for auditions for this Tony-Award Winning Musical! 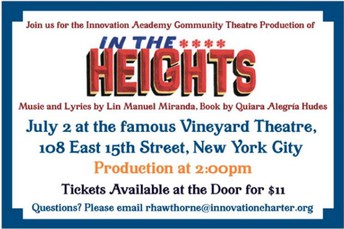 We are so proud of the actors who are performing in a special Community Theatre showing of In The Heights in NYC! We would love to have you join us!

Tickets must be ordered for Awards Night by Sunday, May 26

We will meet for appetizers on the high school side patio, hold an awards ceremony in the auditorium where all nominees receive prizes, and finish the night with a dance party. Nominees will need a ticket. Friends and family members of those in the theatre program are welcome to attend at the same price. Questions? Please email IACS Drama iacstheater@gmail.com

Eighth grade jury week is here! Sixth graders will present the week after beginning on 6/4. Students should be practicing their presentations each day until their designated jury time. During at least one of these practice sessions, please have them practice with an older sibling or parent to give your child feedback on adjustments they can make before their jury presentation. Please also remind your student to dress professionally for their presentation.

Families and students that will be attending IACS High School next year please be sure to sign up for one of the HS Family Orientations. The student and at least one parent/guardian should attend the orientation meeting. Each session will be led by our high school principal, Dr. Arnold, who will discuss with you important information about the transition to high school.

Please plan to attend one of the following sessions:

Please let Crystal McKiel, (cmckiel@innovationcharter.org ) know which orientation you will be attending so that we can plan accordingly.

Eighth Grade Families: Save the Date- Moving Up Ceremony

The 8th Grade Moving Up Assembly will be held in our school auditorium from 8:15-9:15 am on Tuesday, June 11th. Eighth grade students have a ceremony including a retrospective account of middle school written by students and recognition of students’ completion of middle school. This will be followed by a continental breakfast for students and their guests. Due to space constraints in the auditorium, students are limited to no more than 2 guests at the assembly. Please respect this rule to ensure all that attend can be seated.

There will be morning and afternoon programs available, each with a different focus.

More information, including how to register, can be found here. 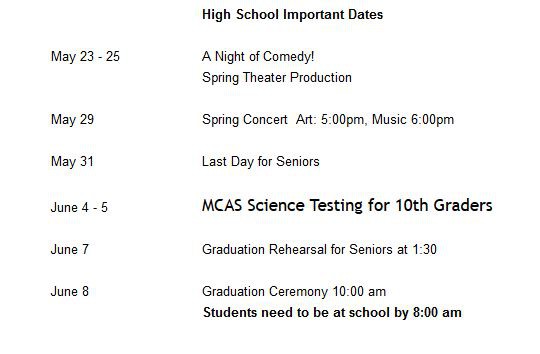 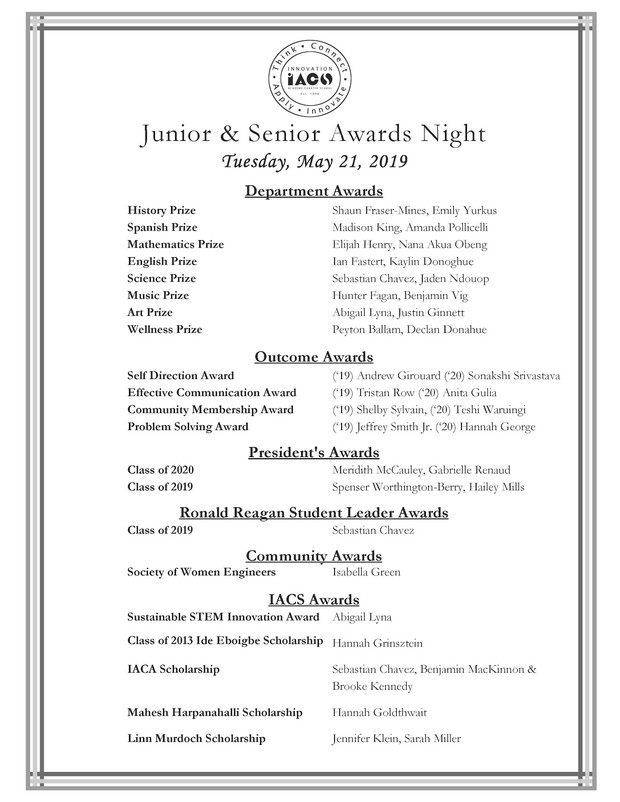 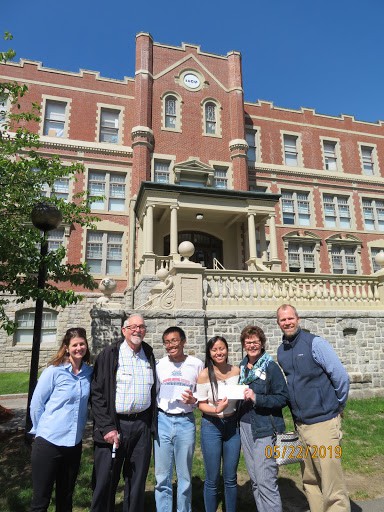 Our students will be attending fantastic colleges and universities next year…view the complete list HERE.

Tuning up for the Spring Concert

Even with several members of the Instrumental Ensemble on a field trip and Mr. Sciolla home with the sniffles, Tyler and the band keep jamming!

Dracut Rec Fun Run is a kids track program that runs July 10th, 17th, 24th and 31st from 5:30-6:30 at the Dracut HS track. We are looking for volunteers to help lead groups around to the different activities. No track knowledge is needed! Please contact Shannon Talbot if you are interested! 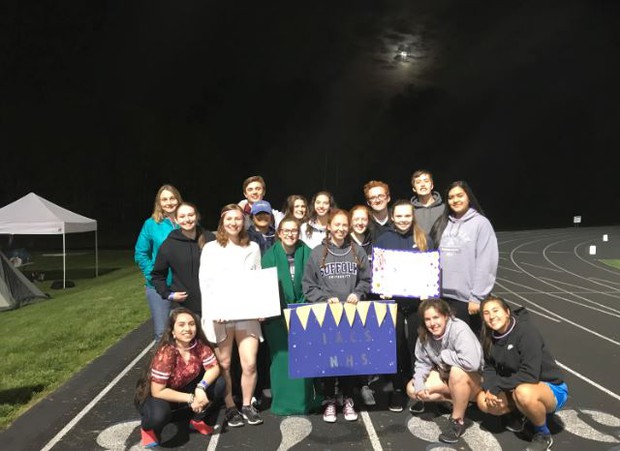 Congratulations to the IACS NHS Relay for Life team for a successful fundraising event towards cancer research! 20 student members walked the track at Bedford HS this weekend, with some students staying overnight and continuing to “fight through the night” in honor of cancer patients, survivors, caregivers and loved ones. Special shoutout to Madison King, Sophia Yurkus, Jacob Babcock and team leader Emily Yurkus for their overnight walks! A special thank you goes to team leaders Emily and Sona for their dedication in leading the event!

Feel free to reach out to each department or Ms. Kelly with questions.

Do not iron the gowns. Hang them up to release the wrinkles.

Are you starting a job this Summer? Chances are you will need a work permit.

Please submit a completed work permit application with promise of employment to Ms. Kelly 48 hours priors to your start date. During the Summer please email her in advance.

HIgh School Photos of the Week 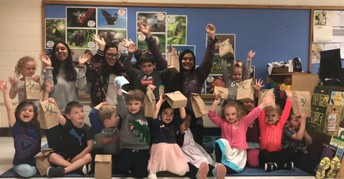 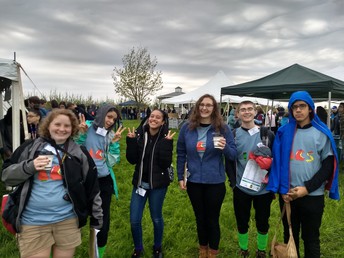 IACS Envirohawks had fun and did a great job competing in the Envirothon Competition last weekend. 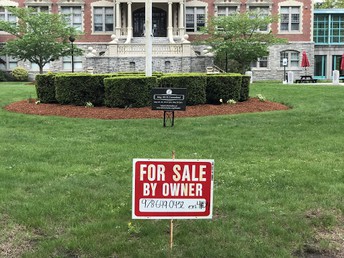 Last Bash – We need your help!

Hopefully you’ve already sent in your check for $20.19 to support the Last Bash, a drug/alcohol-free, safe, lock-in night for the senior class to celebrate one last time with their classmates! If not, we’d love if if you’d click here to donate now.

We are also in need of chaperones for this event; Please consider taking a shift and getting a glimpse at the epic nerf gun battles, hypnotist or soccer games, it’s a nice way for MS and undergrad parents to see what goes on at these events. (Attention Alumni: If you’ve been out of school for at least two years, we’d love to have you volunteer too!)

Additionally, you can find a list of wishes for our Last Bash grad gifts here: 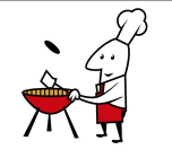 End of Year BBQ Your assistance is needed for our annual BBQ.

To volunteer or donate – please visit the most current list of needs here:

The IACA scholarship award recipients are:

Congratulations to these 3 outstanding students