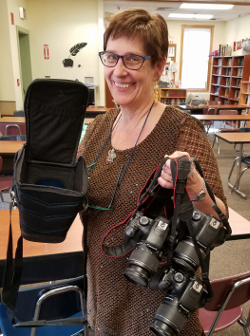 Peggy has been working with children in some capacity for most of her adult life: as a Girl Scout leader, home schooling parent, religious educator, theatrical director, inclusion aide and now ELA Teacher.  After earning her B.A. from the College of William and Mary she worked for several years as an assistant restaurant manager for Colonial Williamsburg and then had the opportunity to stay at home and raise her three children for the next 20 years.  Peggy has been involved with the IACS Community since 1999, when her twin daughters entered as eighth graders. Peggy chose the school for her family because of the unique mission and close-knit community and has remained for the same reasons.  Over the years she has filled various roles including parent volunteer, instructional-aide, long-term substitute and Middle School Yearbook Advisor.

Excited to be teaching ELA, Peggy encourages her students to use language to eloquently express themselves as they strive to understand the world around them.

In her other life Peggy is an actor (film and stage),  handbell ringer, theatre-goer, avid reader and passionate photographer – she is rarely seen without a camera hanging around her neck.  But more than anything she cherishes time when she can walk wooded trails with her beloved dog Wendy.